Hello Francisco. It’s a pleasure chatting with you. To begin with, tell us briefly what is your academic background, what do you spend most of your professional time doing? And, let’s give it a human touch, what do you do in your spare time?

Hi Sheila, delighted to talk with you, it’s an honor. Well, I’m passionate about technologies by vocation, I am a computer systems engineer by university deformation. 😀 I say deformation, because in my time the incidence of big technology companies in the training of professionals as operators of proprietary technologies was much stronger than in generators of their own technologies.

In the last 6 years my professional time has been dedicated to promoting free culture, working in support of public policy to promote the use of free technologies, development of human talent in free technologies, promoting Open Access, fostering a culture of open innovation. Since the pandemic I work independently on these same issues through the Openlab Foundation, a non-profit organization that we co-founded with other colleagues. Right now with Openlab we are working hard on the dissemination of Open Science and supporting the dynamization of free software communities.

My free time? What is that? I don’t understand 😀 Well, here I don’t know what to tell you, I don’t know if it’s good or bad… What I do from Openlab is more than a job, they are things that move our hearts and blur with free time. But, well, I also try to travel when I can, enjoy movies and my family, especially now in these pandemic times.

A few days ago it was announced the First Ibero-American Congress of Open Science, which will take place on November 23 and 24, 2022. Tell us and give us the information, important dates and what you consider.

Of course. Congress is a tremendous responsibility. The Congress is part of this dissemination process that we began in 2020 with the Discovering Open Science Conferences. We started the first planning activities in May. On July 15 we launched the congress, since then the call for abstracts of research papers and posters/infographics is open. Abstracts will be received until September 15. The abstracts of those papers that will go on to the congress will be approved until September 30.

We want to know what the region is doing to promote Open Science, which research works are implementing open practices or which countries or institutions are working on policies, good practices or actions to make science sustainable, inclusive, reproducible.

Important dates of the First Ibero-American Congress of Open Science 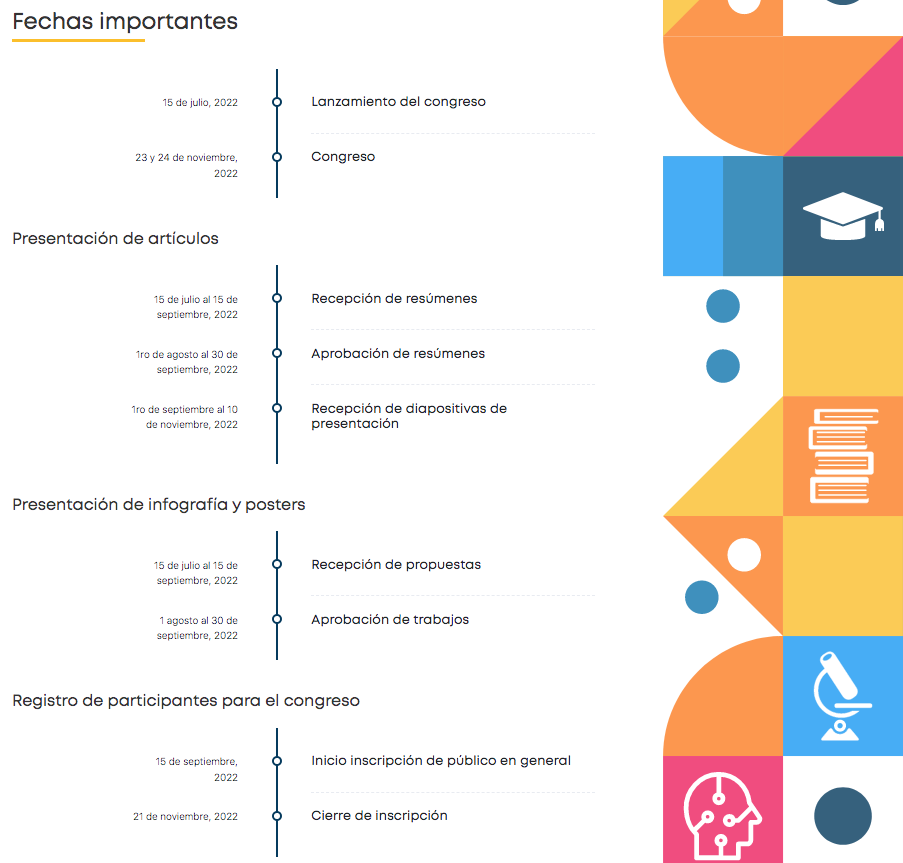 The First Ibero-American Congress of Open Science is structured under 8 themes:

Why were these themes identified?

To reach these 8 thematic lines, we start from the UNESCO Recommendations on Open Science, approved in 2021. For the 3rd edition of this year’s Discovering Open Science Conferences, we got together with ASAPbio (Iratxe Puebla) and the Universidad Distrital Francisco José de Caldas from Bogota (Fernando Piraquive), who are part of the co-organization of this year’s Conferences, and we proposed 12 thematic lines on which the sessions of the Conferences were worked on. These 12 lines linked to the UNESCO Recommendations were really the basis, then, together with the organizing committee of the congress, we synthesized them into 8 lines.

We think that they encompass some of the current discussions around Open Science, such as the evident impact and contribution to humanity of open practices during the pandemic, evaluation mechanisms and incentives, among others.

It is known that there have been two Conferences prior to the Congress “Discovering Open Science 2022” that have had a very positive impact on the networks and have brought together a significant diversity of participants, countries and places from where it is spoken. It could be said that these Conferences are the Congress and there is an important challenge to improve and/or deepen the impact achieved, why such a structure?

Oh, well… I don’t know if there is really a “why”. I think the “why” has come along the way. A “why” could be, that when we started the Conferences in 2020 in the middle of the pandemic,  the Open Science working group of the Free Knowledge Research Network of Ecuador emerged. We felt the imperative need to make disclosure, to make known the principles of Open Science to the Ecuadorian academic community as a first step to be able to do political incidence.

The Conferences arose, with a lot of enthusiasm and a lot of uncertainty. Along the way, I met wonderful people who have connected us with more interesting, generous people, willing to share their knowledge and experience and to invest time in it. The first edition was a living agenda that was built along the way in a collaborative way by connecting people. This made me fall in love with the project and we decided to do a second edition in 2021 under that same collaborative model.

I can say that the Conferences is now an event of the Ibero-American Open Science community that is carried out from the community for the community.

This year, the Conferences will only have two cycles, since the Third cycle is the Congress. The aim is to discover more actors in the community working on Open Science issues.

We agree with the Organizing Committee that it should not be a common Congress that celebrates the vices of the scientific system, but focuses on broad participation, with the motivation of wanting to share knowledge and not wanting to add numbers to the resume.

The First Ibero-American Congress of Open Science has organizing and co-organizing institutions that have left their mark in the region, in one way or another. Are there plans to conclude with a manifesto or roadmap to support the decision-making process of Ibero-American institutions? Or is the main purpose of the event to encourage reflection, the meeting of different experiences and so on?

I think we have a significant number of manifestos, recommendations, declarations, which denote different milestones in the history of open science, just to mention a few, the BBB founding Declarations, the Salvador de Bahia Declaration, the Panama Declaration, the UNESCO Recommendations on Open Science, the BOAI20, the Declaration of Principles of the Latin American Forum for Research Assessment (FOLEC), the Leiden Manifesto, DORA and, well, a lot more.

The Congress aims at reflection, the meeting of different experiences, connecting a large Ibero-American community of Open Science, of diverse actors. To expand the process of dissemination of Open Science to all possible spaces.

When talking about Open Access and/or Open Science experiences, Ecuador is a bit blurred. Can you please tell us how these processes are advancing in Ecuador? And we take advantage of the space to know the experiences that you consider relevant.

Now that you mention it, I remember that a research professor from a University in Guayaquil who follows the Discovering Open Science Conferences, she contacted us and asked us this question: “What are we doing, how have we advanced to achieve Open Science?” We met and talked a bit about it.

I told her that in Ecuador 80%, or perhaps more, of the universities in the country have Open Access digital repositories, which began to be implemented since approximately the year 2009. In terms of public policy instruments, there are regulatory bodies that have been emerging or being reformed. For example, the Organic Law of Higher Education, which provides for making theses available in digital repositories, or its regulations, which provide for making research works financed 100% with public resources available in Open Access. There is also the Organic Code of the Social Economy of Knowledge, which states, among other things, that knowledge is a public good. Likewise, the Academic Regulation, which provides incentives for institutional policies to promote Open Access, which must be reflected in institutional plans, among others.

There is still much to be done, such as harmonizing the different standards, for example those related to how the researcher’s career is evaluated and how universities are evaluated, among others.

Nevertheless, much remains to be done in terms of outreach. We did a poll in 2021 to see the perception about Open Science of the academic community. Out of 580 respondents (teachers, mostly researchers), 20.34% knew what creative commons licenses are and how they work, 24.66% had ever heard of citizen science. This gives us the idea of the pending work to be done.

Thank you. It is very important to know, personally, I did not know about it. It is important to make it known.

After the Congress, and as there are a few weeks left to the end of the year, what activities do you consider necessary to continue advancing Open Access and Open Science?

I remember that at a time when I was a public servant promoting a public policy instrument to promote free software from the State, I had to talk to some authorities explaining the sense of that instrument, the social and economic benefits, showing data on how much money the State was spending on licenses and who were benefiting from it. This made it possible to sustain the policy instrument that large local companies were promoting in order to eliminate that handful of companies that were benefiting from the State.

The biggest problem is the ignorance, the lack of knowledge on the part of the authorities about the social and economic benefits that free and open source software, open data and Open Science can generate.

Francisco, what have we left out?

I don’t know… I am now thinking about the community, about how it will be sustained over time, about how important it is to dialogue not only with stakeholders but also with others. I get very excited when I read or hear them say that in the north they are interested in learning about the southern model in order to replicate it. Perhaps BOAI20 is an expression of this. We are part of the same scientific ecosystem, what is done in the north or in the south impacts us all in some way, for better or worse.

The great Ibero-American open science community is growing and must continue to join forces, leaving differences aside. Each country has its own reality and processes, the important thing is to know those realities, make those experiences known and learn from them so that Latin America can act as a bloc. It seems that the latter is still difficult for us.