As members of the National University of La Plata, having institutional responsibilities as regards visibility of scientific output, we express our concern for the decision made by the country’s Ministerio de Educación, Cultura, Ciencia y Tecnología to actively participate in Coalition S, an international alliance that encourages open access to scientific and scholarly publications but through a “pay-for-publishing” model (APC). Joining such system means spending millions unnecessarily, which also, is sustained with public funds for research.

As professor Arianna Becerril explained, as we see it what Coalition S proposes to attain Open Access encourages a model that maintains article processing charges, therefore, it maintains the closed and selective system in favour of commercial databases. While for Argentina this model costs upwards of 20m dollars per year, numerous are the institutions of international prestige in Europe and America that have questioned it, modifying or rejecting commercial agreements with the main publishing firms.

From our perspective, held and shared with a large number of institutions from the region and the world, we believe it’s necessary to secure, especially from public institutions, Open Access to our knowledge through free publishing and free access. In other words, it must be available and free for readers and authors alike. For years, the National University of La Plata has stood as a pioneer on this, on the continual quest for the democratisation of knowledge.

Concerned do we observe how researchers, financed by our citizens through the State, have to pay to have their researches published in journals from international commercial publishers, which privatise and restrict access to such publications. As Humberto Debat and Dominique Babini argue, though Coalition S has its own discourse on Open Access and represents the rearrangement of a quite criticised model in the international scientific community, we see that it hasn’t modified restrictive practices.

We are particularly anxious because the Ministerio de Educación, Cultura, Ciencia y Tecnología of Argentina signed the “JOINT COMMUNIQUÉ. XI Joint Steering Committee Meeting of the Bilateral Agreement on Science and Technology between the European Union and Argentina” last 7 June 2019.

Therein the representatives of the European Union and Argentina consider that: “Having stressed the commitment to search for common approaches for research and innovation, and particularly, for open access, Argentina joins Coalition S, the global coalition that promotes open access to scientific output. Argentina expressed its interest to promote a regional initiative on this subject among Latin American and Caribbean countries.”

As we have said, our university has a centenarian publication tradition and is a pioneer in Argentina for developing a policy of disseminating research output of its scientific community via open access repositories and journals. In this sense, the National University of La Plata is founder of the initiative Ameli Open Knowledge, together with the United Nations Educational, Scientific and Cultural Organization (UNESCO), the Latin American Council of Social Sciences (CLACSO), the Scientific Information System Redalyc, the Autonomous University of the State of Mexico (UAEM) and Universidad de Antioquia (UdeA). At present, we’re developing this initiative that has great impact for the region.

Through the collaborative work of these institutions with Redalyc, which is being reshaped as declared by Aguado, Becerril and Chávez, we’re moving towards a model for the management of scientific and scholarly journals, intended to rebuild the spaces of visibility which have turned into spaces for legitimacy and exclusion; to have a project to communicate critical thinking that responds with alternatives to dissemination, building of networks, analysis, training, and technology for the scientific publishing process.

Guillermo Banzato and Cecilia Rozemblum have demonstrated how this management model, adopted by AmeliCA, is able to publish journals—with scientific and editorial quality—with fewer resources, same efficiency, greater visibility and in Open Access as it should be: available and free for readers and authors.

To us, in the scientific Argentinian system the management and assessment model of research output should be deeply debated, taking into account productivity conditions, technological developments and the training of professionals, as well as the resources meant to support a sovereign system of scientific production, editing and assessment. 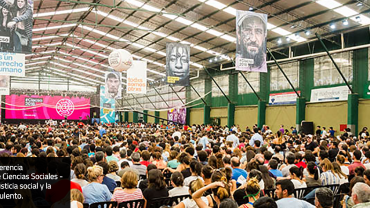 Professor, BA and PhD History. Researcher, National Scientific and Technical Research Council (CONICET). Professor at the National University of La Plata. Pro-secretary of Editorial Management and Dissemination at the School of Humanities and Education, UNLP. Executive Secretary of AmeliCA.