From the point of view of commercial publishing, Open Access is gradually shifting the payment for access towards publication, either for evaluation, review, processing and/or publication; a mechanism called APC (article processing charges). This modification in commercial publishing is mainly driven by Plan S, the Open Access strategy of the main science funders in Europe.

In this context, the rigorous and detailed work of CoLav had the aim to “calculate the APC costs assumed by Colombian universities, identify the type of access to publications made in the last 10 years (2009-2019), and other derived analyses” (CoLav, 2020: 8). Among its findings it highlights:

The contribution of the Diamond Publication in Colombia

Institutions that generate scientific knowledge and/or finance scientific research are currently concerned about the advance of commercial publishing, specifically, where APC is promoted as a condition for opening academic content. As a result, analyses of cost-benefit, payment capacity, cost maximization, etc. have become recurrent, aimed at diagnosing the financial capacity of institutions to face the “new” dynamics of commercial publishing and, based on this, to negotiate and enter into transformative agreements with publishing houses2.

However, this concern of institutions and consortia is omitting the diagnosis of their performance in other circulation of knowledge models such as the Diamond publishing model. In this context of global and regional concern, the purpose of this work is distinct, and it has the aim of highlighting something that seems to have been taken for granted. This work aims to show, in general, the contribution that the Diamond publication does to the dissemination of scientific knowledge generated by Colombia, a model that has been assumed and omitted in the diagnoses of its performance in academic publication.

Unlike the study conducted by CoLAv, the brief analysis presented here is not exhaustive, but considers only one infrastructure —perhaps the only one— that exclusively indexes Diamond journals (without APC), the Redalyc Scientific Information System. Redalyc has evolved from an Ibero-American infrastructure with emphasis on Social Sciences and Humanities, to a global Diamond Open Access infrastructure; it currently indexes around 1,500 journals. The information on the publication of Colombia in the Diamond infrastructure is available on the Redalyc3 website. Based on this information, it was possible to present this diagnosis.

Between 2005 and 2021, Colombia has published 65,876 scientific papers in which at least one author with affiliation to a Colombian institution is identified. The indicators shown derive exclusively from peer-reviewed writings, although Redalyc identifies a total of 78,160 documents published by Colombia that include editorials, reviews, interviews, or other types of writings, as well as works prior to 2005.

The 65,876 scientific articles published derive from 158,171 forms of author with affiliation to 2,752 Colombian institutions. These were published in 1,207 Diamond journals from 591 publishing institutions (77 Colombian y 514 foreign) from 17 countries4; 52.4% of papers correspond to scientific production of Social Sciences, Art and Humanities, while 47.6% correspond to Natural and Exact Sciences.

13.2% of Colombia’s scientific production in Diamond journals was published abroad and shows a growing trend, that is, foreign journals host more and more scientific publications from Colombia: in 2005, 9.5% of Colombian production was published abroad, while in 2021 this volume increased to 25.6%. Publication in Colombian journals represents 54.6% and publication in journals of the authors’ own institution is 32.2%, but with a sustained contraction. This aspect shows that it is mainly the Colombian journals that have sustained the communication of scientific contributions from this country throughout the 17 years of the study.

Of Colombia’s publications abroad (13.2% of the total published), it should be noted that these have been mainly in Latin America: in Mexico, Venezuela and Chile, practically half (49.8%) of the scientific articles sent abroad have been published.

In turn, in the scientific production of Colombia identified from the Diamond infrastructure, the percentage of documents with Spanish as the first language represents 87.1%, while the percentage of documents with English as the first language represents 12.3%; both sets have a second language of publication. This contrasts with the 26.18% in Spanish and 69.07% in English of the publications analyzed by CoLav5, and shows the relevance of the knowledge published in each publication model. What are the possibilities of use and local appropriation of the knowledge if the language of publication hinders or facilitates its understanding?

A final line from which to characterize the contribution of Diamond publishing in Colombia is the use of scientific production: from Redalyc it is possible to identify a total of 70,643,084 downloads between 2013 and 2021 to the Colombian scientific production published between 2005 and 2021, which implies an average of 7.8 million downloads per year.

This could lead to two elements in the Colombian science communication strategy:

Nowadays, Open Access observatories are common. However, given the reconfiguration of Open Access today, it is increasingly relevant to differentiate between Gold Open Access and Diamond Open Access. The trajectory of open scientific communication has led us to the need not only to distinguish what is “open” (in terms of access), but to identify what corresponds to an expansion of a commercial model (with access to content) or the expansion of a non-commercial model that represents the possibility of building an inclusive, collaborative ecosystem that serves the interests of science and knowledge: its articulation with local contexts to solve problems.

The trajectory of Open Access has shown us that open is an insufficient goal and, instead, in line with the Open Science Recommendation of Unesco (2021) and the Budapest Declaration 20 years (2022), we must move towards integration to take advantage of what is open in innovation and technological development. Particularly, today it is especially relevant to remember that Open Access is not an end, but a means (Aguado-López, 2021: 49). Therefore, seeking to justify transformative agreements under the accounting concept to the extent that it “allows savings”, implies evading the central issue: to modify the model of scientific communication towards one that is structurally sustainable and that conceptually enables inclusion, multilingualism and epistemic justice.

On the other hand, a step in making visible the invisible can be to recognize the Diamond publishing model in the contribution it makes to the communication of knowledge and as a legitimate and valuable reference in academic evaluation. When publishing from the Diamond model, one speaks of the parallel activity of multiple actors: of the editorial capacities formed in an institution (journal); of the use of operating code or open electronic management systems; of professional, supportive and collaborative peer review; of online publication; and of the empowerment and articulation in the global ecosystem of scientific communication by non-commercial Open Access infrastructures; to sum up, a publishing model based on the concept of knowledge as a common and public good.

2. Other institutions and countries, on the other hand, are abandoning this discussion and are considering not to continue negotiations aimed at transformative agreements and offset agreements. One example is Sweden.

3. The information and visualizations on Colombia are an example of the indicators that the Redalyc Scientific Information System has permanently available for different entities: countries, institutions, journals, authors, areas of knowledge and disciplines.

5. The abandonment of Spanish and the predominance of English in Colombian scientific production has also been documented in specific fields such as Biological Sciences, where approximately 90% of the production has been published in English (Ramírez-Castañeda, 2020). 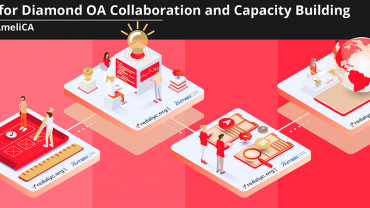